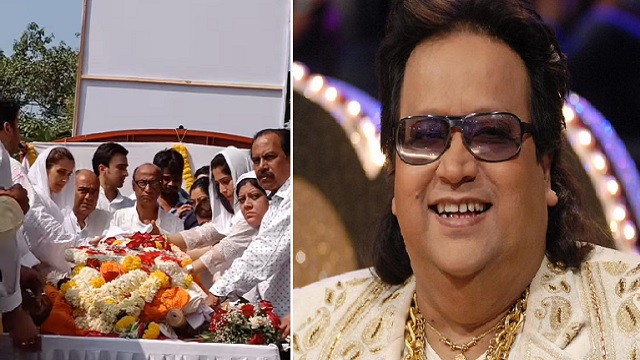 Mumbai : Bollywood’s most loved veteran musician, Bappi Lahiri, died on Tuesday night at a hospital in Mumbai due to multiple health issues. He was 69-years-old at the time of his demise. His family released a statement yesterday saying that his cremation will take place on Thursday.

According to the statement, the last rites were to be held on February 17 as they were waiting for Bappi’s son Bappa Lahiri to return from Los Angeles. “It’s a deeply sad moment for us. Our beloved Bappi Da has left for heavenly abode last midnight. The cremation will take place on the arrival of Bappa from LA tomorrow mid-morning. We are seeking love and blessings for his soul,” the statement read.

Bappa Lahiri returned from the US with his family for carrying out his father’s last rites hence, the funeral ceremony was performed today in Pawan Hans crematorium in Mumbai.

Bappi’s doctor Deepak Namjoshi confirmed the news of his demise and said that the legendary singer died on Tuesday night due to multiple health issues. He said, “He had been admitted to the hospital for a month and was discharged on Monday. But his health deteriorated on Tuesday and his family called for a doctor to visit their home, following which he was brought to the hospital. He had multiple health issues. He died due to OSA (obstructive sleep apnea) last night.”

The ‘Disco Dancer’ hitmaker’s sudden demise left everyone in shock. Several fans of him took to social media to pay tribute to the legendary singer.

It is to be noted that Bappi Lahiri was also hospitalised in April last year after being tested positive for coronavirus.

Bappi Lahiri, originally named as Alokesh Lahiri, was fondly known as ‘Bappi Da’. He was an Indian singer, composer, politician and record producer and is best known for popularising disco music in Indian cinema, for which he also earned the title of ‘Disco King’. For his spectacular work in movies like ‘Disco Dancer’, ‘Namak Halaal’, ‘Dance Dance’ and ‘Commando,’ the musician experienced massive success in the 1980s and 90s.