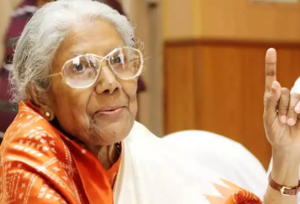 Taking to his official Twitter handle the Prime Minister said “The passing away of Gitashree Sandhya Mukhopadhyay Ji leaves us all extremely saddened. Our cultural world is a lot poorer. Her melodious renditions will continue to enthral the coming generations. My thoughts are with her family and admirers in this sad hour. Om Shanti.”

Mukherjee passed away on Tuesday at the age of 90 years.

Worth mentioning, Sandhya Mukherjee, also spelled as Mukhopadhyay, was an Indian playback singer and musician, specializing in Bengali music.

She had received Banga Bibhushan, the highest civilian honour of West Bengal in 2011. She also won the National Film Award for Best Female Playback Singer for her songs in the films Jay Jayanti and Nishi Padma in the year 1970.