Assistant Commandant killed in an encounter with naxals in Chhatisgarh 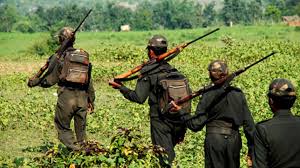 Raipur: A Central Reserve Police Force (CRPF) officer was killed and another jawan sustained injuries during an exchange of fire with Maoists in Chhattisgarh’s Bijapur district on Saturday, officials said.

The deceased officer has been identified as S B Tirkey.

The incident took place at Timmapur-Putkel under Basaguda police station area of the district when a CRPF patrol comprising personnel of 168th battalion was out for a road opening and sanitising duty.

The officer suffered bullet injuries and later succumbed. informed officials and another security personnel sustained injuries in the encounter.

The combing operation is currently underway in the area, about 440 km from state capital Raipur.