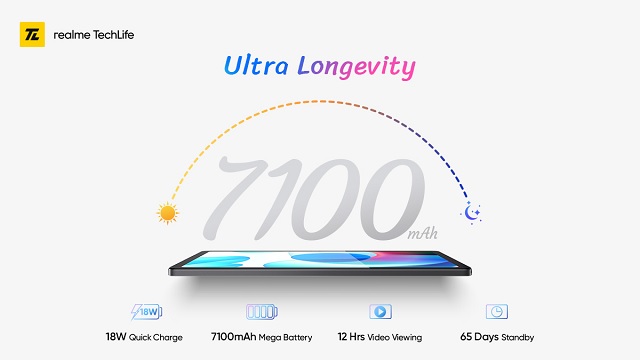 Realme Pad, company’s first tablet has been confirmed to come with a massive 7,100 mAh battery that will have 18W Quick Charge support for longer period of seamless entertainment. Realme CEO for Europe and India, Madhav Sheth has confirmed this battery specification in a tweet.

Madhav Sheth has shared some of the key specification details of the upcoming tablet through a tweet.

The executive has revealed that the Realme Pad will pack a massive 7,100 mAh battery with 18 W Quick Charge support.

Earlier, the realme Pad was scheduled to launch with the company’s first laptop, Realme Book series. However the company had to postpone the launch of the tablet for one more month. Now, the device is finally going to be unveiled this month.

The 7,100 mAh battery is claimed to deliver up to 12 hours of video playback with a single charge. The device is also claimed to have 65 hours of standby.

The tablet’s battery will have 18 W Quick Charge and will be charged through a USB Type C port.

The tablet also has an 82.5 percent screen-to-body ratio which is quite good. The new tablet is also sleek with just 6.9 mm of thickness.

The Realme Pad was also spotted on a Geekbench listing which revealed that the phone will likely be powered by a MediaTek Helio G80 SoC which consists of two ARM Cortex-A75 cores at 2 GHz and six ARM Cortex-A55 cores at up to 1.8 GHz and a Mali-G52 MC2 GPU.

The Helio G80 will ensure decent performance for standard tasks and moderate gaming.

The device is said to be a mid-range tablet.